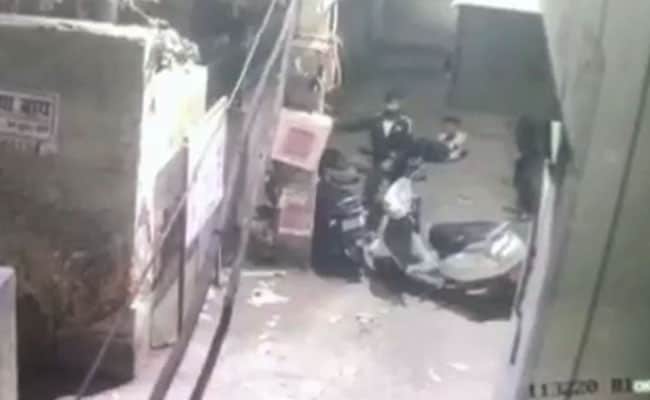 With the help of the CCTV footage, police arrested both the accused

Two men are repeatedly thrashed, punched and stabbed in an alley after a fight broke out among four of them after an altercation, graphic visuals captured by a CCTV from Delhi show. The two victims collapsed and lay bloodied on the street before they were taken to a hospital where they were declared dead.

Rohit Agarwal, 23, and Ghanshyam, 20, were on their scooty when apparently their two-wheeler brushed against the motorcycle of the two accused, police said. The incident occurred, most probably late at night, in an alley near the Udyog Vihar metro station.

A brief altercation followed between the two groups after which a violent fight broke out.

The men are seen slapping, punching and kicking each other in the horrifying CCTV footage. No one seems to be around which seems like a residential area.

A few minutes later, one of the accused takes out a knife and starts repeatedly stabbing a man. The other victim, whose white shirt was now drenched in blood, was seen trying to intervene, even though he could barely stand, CCTV footage shows.

The accused then brutally stab one victim till he collapses and then take on the other.

Both victims are seen lying on the road as the accused casually ride past them on their motorcycle.

Police reached the spot after being informed that two bodies, drenched in blood, were found lying on the street. Both victims were taken to a hospital where they were declared dead on arrival.

With the help of the CCTV footage, police arrested both the accused, one of whom is a minor. Another accused is 19-year-old Pradeep Kohli.

After investigation, the accused said the fight took place after the victims’ scooty hit their bike.

The knife and motorcycle of the accused has been seized by the police.