Elon Musk just hit a new milestone: He made a record $25 billion in one day.

Elon Musk just hit a new milestone: He made a record $25 billion in one day.

Tesla Inc.’s 20% jump on Tuesday — its biggest in more than a year — pushed the billionaire founder’s fortune to $174 billion, closing the gap with Jeff Bezos, the world’s richest person, according to the Bloomberg Billionaires Index. The top 10 largest wealth gainers, all from the tech industry, added $54 billion combined.

After three weeks of declines that sent the Nasdaq 100 Index down 11% from a peak, U.S. tech shares staged a stellar rally on Tuesday that lifted almost all of the gauge’s members. The surge in Bezos’s Amazon.com Inc. helped him gain $6 billion, taking his net worth to $180 billion, while Colin Huang of Chinese online shopping platform Pinduoduo Inc. added almost as much. 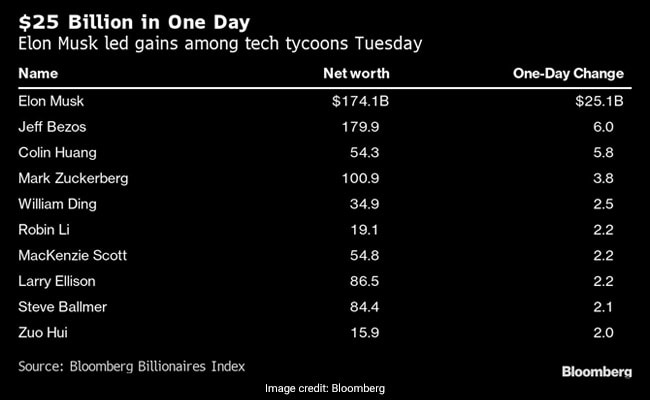 Musk and Bezos have been battling for the top spot on the Bloomberg wealth index since the Tesla founder took over in January, the month his fortune hit $210 billion. Since then, Bezos regained the title of world’s richest as shares of the electric-car maker sank as much as 36%. Now the two tycoons are less than $6 billion apart.

On Tuesday, Tesla also benefited from an upgrade by New Street Research analyst Pierre Ferragu, who recommended buying the stock, and a rally in Bitcoin.

The gains contrast with the remarkable fall of China’s bottled-water king Zhong Shanshan, who in December unseated India’s Mukesh Ambani as Asia’s richest person and surpassed Warren Buffett in January, becoming the sixth-wealthiest in the world. Zhong is now the biggest loser of the year and has dropped off the list of the top 15 on the Bloomberg ranking. Tencent Holdings Ltd.’s Pony Ma is back to being China’s richest, with a fortune of almost $64 billion.

Opinion: Adityanath’s Growing Campaign To Be Seen As Successor To Modi