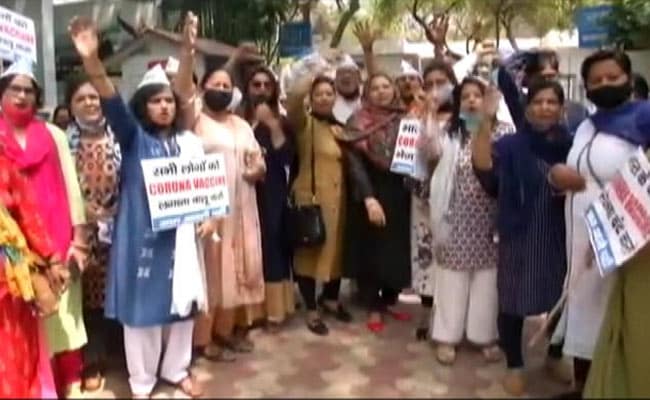 AAP workers and supporters were seen without masks, jostling before the BJP office

A protest against the Centre’s vaccine policy by Delhi’s ruling Aam Aadmi Party today was replete with laxity in terms of Covid appropriate behaviour. Party workers and supporters were seen without masks, jostling on the road before the BJP office, social distancing norms forgotten despite the ongoing second wave of the infection.

The police had said the protest was illegal because under Covid-control rules, such gatherings cannot be held.

Asked when the national capital is recording over 5,100 cases, how can the outbreak be controlled if the ruling party does not insist on mask usage, senior party leader Saurabh Bhardwaj pointed to Prime Minister Narendra Modi and his election rallies. The BJP has been much criticised over the holding of physical rallies ahead of elections during the pandemic.

“The people of this nation follow what the PM does. PM held rallies with lakhs of people in Bihar. Then he did the same in Assam and other states recently. If he follows all the rules, all the others will follow him,” Mr Bhardwaj told NDTV.

“As far as the AAP workers are concerned, even if some of AAP activists get Covid to bring the vaccine to crores of people, we are ready for it,” he added.

Yesterday, as Delhi recorded more than 5,100 fresh cases in a span of 24 hours, the Delhi government announced night curfew with immediate effect. Today, the Delhi High Court underscored the need for mask usage, saying masks should be on even when a single person is inside a car.

The Central government has repeatedly said that laxity in maintaining safety protocols is driving the second wave.

AAP is contending that in the current circumstances, instead of sending 64.5 million doses of Covid-19 vaccines all over the world, the government could have accelerated the nationwide vaccination drive.

“The government exported more vaccine doses than it administered to the citizens,” senior party leader Raghav Chadha said. “To improve his image at global level, PM Modi took the decision and exported over 64.5 million vaccine doses to 84 countries. The government is more concerned about its image than saving people’s lives,” he added.