India To Make Vaccines For Indo-Pacific; PM Says, “Quad Has Come Of Age” 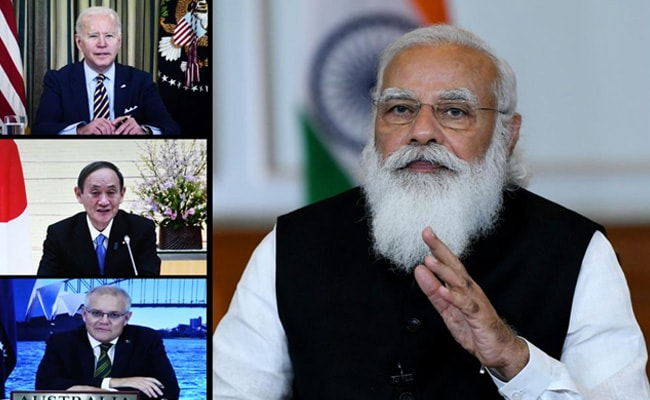 We will work together, closer than ever before, said PM Modi

Prime Minister Narendra Modi, US President Joe Biden, Australian Prime Minister Scott Morrison and Japanese Prime Minister Yoshihide Suga came together this evening in a virtual meeting of the “Quad” group of nations that is central to efforts to counter China’s growing military and economic power.

The group decided to launch a mega vaccine initiative under which coronavirus vaccines will be produced in India for the Indo-Pacific region – in an effort to counter Chinese influence – with financial assistance from the US and Japan while Australia will contribute in logistical aspects.

United in our fight against COVID-19, we launched a landmark Quad partnership to ensure accessibility of safe COVID-19 vaccines. India’s formidable vaccine production capacity will be expanded with support from Japan, US & Australia to assist countries in the Indo-Pacific region.

“PM Modi, it’s great to see you,” President Biden said as the two leaders met for the first time since the new administration took charge after the November US election. PM Modi, in his opening remarks, said the four countries were united by their democratic values and that the Quad would remain an important pillar of stability in the Indo-Pacific region.

“We are united by our democratic values, and our commitment to a free, open and inclusive Indo-Pacific. Our agenda today – covering areas like vaccines, climate change and emerging technologies – makes the Quad a force for global good,” said the Prime Minister.

“We will work together, closer than ever before, for advancing our shared values and promoting a secure, stable and prosperous Indo-Pacific. Today’s summit meeting shows that Quad has come of age. It will now remain an important pillar of stability in the region,” he added.

President Biden, opening the meeting, said the Quad would be a vital arena for cooperation and a free and open Indo-Pacific region was essential to all of their futures. “We know our commitments…Our region is governed by international law, committed to all the universal values and free from coercion but I am optimistic about our prospect,” he said, in an apparent reference to China.

“The United States is committed to working with you and with all our allies in the region to achieve stability. This group is particularly important because it is dedicated to the practical solutions and concrete results,” the US President added.

Briefing reporters on the summit, Foreign Secretary Harsh Vardhan Shringla said it was decided that India’s manufacturing capacity is something that is going to be leveraged to make COVID-19 vaccines. “The aim is to produce a billion doses by the end of 2022,” he said.

He said the financing for creation of additional capacities will come from the US and Japan while Australia will contribute to the last mile logistics and delivery help. Australia will also finance countries which are going to receive the vaccines.

“In today’s context, it is one of the most important initiatives. We are talking about huge investments in creating additional vaccine capacities in India for exports to countries in the Indo-Pacific region for their betterment. We are talking about producing a billion doses of vaccines by the end of 2022,” he said.

He said the summit saw Quad leaders adopting a positive agenda focusing on contemporary issues such as vaccines, climate change and emerging technologies.

The leaders of the United States, India, Australia and Japan also agreed to work together to restore democracy in Myanmar, Mr Shringla said.

The “Quad” or the Quadrilateral Security Dialogue is an informal strategic forum of the US, Japan, Australia, and India set up in 2007. It was revived in 2017 as a buffer against Beijing. The Quad remains a strong focus for the four nations that have each had conflicts with China in recent years. In November, the Quad nations came together to participate in a two-phase joint military exercise, Malabar 2020, in the Bay of Bengal and in the Arabian Sea.

AAP owns up to pasting posters critical of PM Modi, alleges arrest and harassment of its workers by cops | Delhi News – Times of India